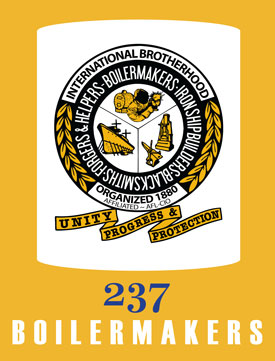 To commemorate the fifth anniversary, a memorial service for the victims of the Kleen Energy accident will be held on Saturday, February 7, 2015 at 11:00 A.M. On February 7th, 2010, an explosion at the Kleen Energy power plant killed six workers and injured dozens of others. Some of those injured were never able to return […]

On Thursday, January 15, 2015 all Boilermakers Local Lodge No. 237 members are again being asked to attend a public hearing to show our support for the proposed CPV Towantic Energy Center project. Members are being asked to arrive at 5:15 PM at the Oxford High School, 61 Quaker Farms Road, Oxford, CT 06478.  This is […]

Scholarship applications are currently available from the Union Hall for the 2015 academic year. Interested parties can call Local Lodge No. 237’s Union Hall to request an application – or they are available at the Hall; and at the next several monthly meetings. Boilermaker scholarships are open to high school seniors who will be entering their […]

The Connecticut Building Trades Association recently released a video supporting Governor Dannel Malloy and Lieutenant Governor Nancy Wyman for reelection. The officers and staff of Local Lodge No.237 respectfully request you join us in voting in Connecticut’s General election on Tuesday, November 4. Be sure to vote Malloy/Wyman for continued job opportunities for trades workers in […]

On Tuesday, August 5 all Boilermakers Local Lodge No. 237 members are being asked to attend a public meeting to show our support for the proposed CPV Towantic Energy Center project. The meeting will be held from 6 PM – 8 PM at the Oxford High School, 61 Quaker Farms Road, Oxford, CT 06478. This two-and-a-half year, […]

Apprentice Eddie Tautkus is participating in the 4th Annual Smilow Cancer Hospital at Yale New Haven ‘Closer to Free’ fundraising ride. The ride is particularly meaningful to Eddie as his Grandmother passed away from breast cancer a few years ago. “My grandmother helped me when I was younger by telling me to never stop dreaming […]

Recently, the Connecticut State Building Trades reached out to its unions in an effort to gather information concerning their upcoming election. To that end, they have asked our membership to participate in a confidential online survey. The information they collect will help in their search for the right candidates and for the right issues. This […]

Send a Message to the EPA

As you may or may not already be aware, the EPA has just released sweeping changes to regulate existing power plants. Left unchecked, the EPA will write rules that could threaten your electric provider’s ability to keep affordable power flowing to homes and businesses. Plus, these new regulations will hurt the economy and cost us […]

On Friday, June 13, Boilermakers Local No. 237 held elections. The results of the election for Officers are as listed below, with the following having been elected to serve a 3-year term – beginning July 1, 2014. Mark Pinard – Business Manager/ Secretary Treasurer Christopher O’Neill – President Lucas McDonald – Vice President Michael Pierce […]